I stumbled upon a strange behavior (SecurityException-s thrown) in WebLogic 12c (and probably older releases) when calling remote EJBs related to the usage of InitialContext. This article summarizes my findings.

While processing a request, the WebLogic application server manages a stack of users. The last user pushed on the stack is the user that is currently active - calls to further EJBs will automatically run as this user. When creating a new InitialContext with a principal, WebLogic pushes it on the stack and the principal provided becomes the active user. It remains active until the InitialContext is closed (or the request processing finishes). This behavior paves the way for very unpleasant situations that I will try to explain based on the following test setup.

We have a JAX-WS web-service packaged in an EJB3 application invoking local and remote EJB2 beans after looking them up in the respective JNDI trees. This is shown in the sequence diagram below: 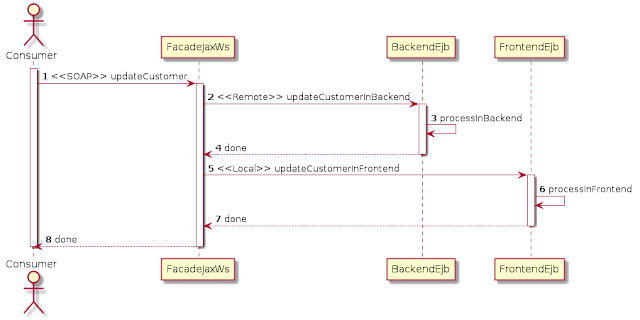 Depending on when and if at all the FacadeJaxWs closes the initial context when invoking the BackendEjb, a security exception can be thrown in different places.

This seems to be the usual thing a developer does. This is depicted in the code below:

As you can imagine, this is extremely unpleasant, as it will not cause any problems (the mine will lay dormant) until another developer comes in and extends the processInFrontend method to call another EJB. Then the mine will go off and will catch the developer by surprise - something that they have done many times (calling an EJB from another EJB using InitialContext lookup) suddenly does not work in that specific situation. With the WebLogic JNDI knowledge from above, there is a good explanation for that - line 13 pushes the backend_user on the user stack and it becomes the active user. Any new EJB invokations will run as this user which is not really known in this domain. Note that using @EJB to inject the FrontendEjbHome somehow worsens the situation, as the JNDI lookup is done much earlier (with the correct user) and we do not run into the problem in all cases.

This variant is depicted by the code below:

This exception is actually thrown by the Backend managed server when we try to create the remote stub using the remote home interface on line 16. This is a much better situation than the previous variant, as we will always run into the exception (note: it does not seem to happen in EJB2 code). The explanation also comes easy - closing the context on line 15, pops the backend_user from the stack and the active user again becomes the ws_user. This user, however, is not known in the backend domain and thus the exception is thrown.

Finally we get to the correct usage of InitialContext - we close it after invoking the actual business method like this:

This time we call the business method right after creating the initial context - this allows for the method to run in the context of the backend_user. Only after we have finished our interactions with the backend EJB, do we close the context (on line 21), switching back to the ws_user and executing the FrontendEjb as a user that is known in its WebLogic domain.